5 Easy Ways to Test the Purity of Shilajit

Whenever demand of a specific product goes high, it’s purity is compromised by the dealers to make more profit. The same is in the case of Shilajit. Shilajit; which is also known as mineral pitch, is a sticky substance obtained from Himalayas and is used in traditional Ayurvedic medicines for centuries. Shilajit is helpful in proper brain functioning, prevents ageing, prevents iron deficient anaemia and has antiviral properties. Also, it is rich in fulvic and humic acids. Its demand has increased multifold in the past decade due to its healing properties for the human body.

Pure and authentic Shilajit is difficult to obtain. And therefore, it has led to multiple cases where fake or adulterated Shilajit being sold.  Shilajit is beneficial only if consumed in pure form. There are various methods to test its authenticity, some of which are very simple and can be easily done at home from the basic things. Some of them are given below. First of all, never buy Shilajit in a powdered form or as a capsule. Both of these forms of Shilajit are adulterated with fillers and binders. Pure Shilajit raisins are sticky, black in color and are tar like.

Another simple way to test the purity of Shilajit. Take a small piece of Shilajit and put it in water. Authentic Shilajit will readily dissolve in water turning it into dark brown or reddish black, without leaving any residue behind. But if the Shilajit is mixed with fillers, there will be sandy residue behind and the water will also taste sandy.

To test the purity of solid Shilajit, Flame test is the most reliable. When pure Shilajit is put on fire, it will not burn. But, upon heating at higher temperatures, pure Shilajit will create bubbles and will turn into ash. In case the Shilajit is impure or has impurities, it will catch robust fire.

Pure Shilajit is mostly dark in color and is very rarely white. It has pungent smell as it is formed as a result of breaking down of plant matter and minerals. 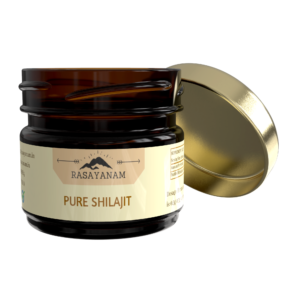 Purity Guaranteed
Rasayanam shilajit contains only natural ingredients and each batch undergoes extensive quality control inspection to ensure we only provide you products that are of unmatched quality.

Gold Standard
Our Shilajit is extracted from the most fertile locations of Himalayas located at 15,000 ft – 16,000 ft. of elevation. We work with locals who understand the herb to make this possible.

Tested for heavy metal & food safety
Our shilajit is certified and tested for harmful heavy metal. Report can be assessed here. We are also FSSAI (Food Safety and Standard Authority of India) approved.